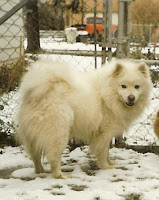 It is with a very sad heart that I say good-bye tonight to a dear and old friend. We had to make an extremely hard decision today to have our dog put down. - For the last few weeks he's been having problems breathing and passing out. We thought he might have had a tumor or growth in his throat. Yesterday my husband took him to the Vet and we were told that his heart was going bad. We had hoped that medication would help him but the poor thing was having such a hard time breathing and the least little exertion was just wearing him down. So tonight we called our vet and had him put down.

We had many many happy years with him and at times would get so aggravated with him because as we often joked, he "barked" to hear himself bark. He loved marshmallows, digging, barking, playing with our other dog Angel, being petted & going for car rides. He was always a HAPPY dog and we will miss him a great deal. He had lots of nicknames (Buddy Dog, Barky, Happy Dog, to name a few). It's a sad time of the year for this to happen but he's in a better place now & while we grieve he will not be forgotten and we have the memories of those happy times to cherish in our hearts.

GoodBye Rebel - Forever in our hearts!