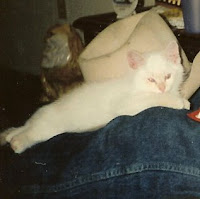 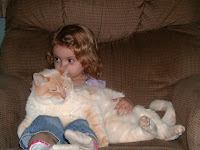 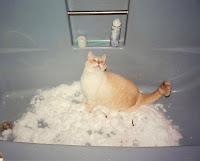 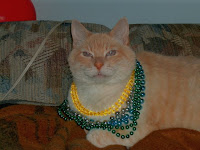 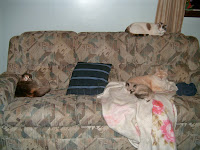 In Fond Memory of one of the COOLEST cats that ever lived.
Nuisance came to live with us one cold, rainy night in October of 1994. I had gone to the grocery store and when I came home the kids were sitting in the doorway with this tiny little soaked kitten. I asked them where on earth did they get a kitten and they said he just wandered into the yard. Well we took him in and got him dried off & fed as he was very hungry. We discovered that he was covered with fleas so we spent about an hour bathing him and picking fleas off of him as we knew my hubby wouldn't let us keep him unless we did.
We knew this kitten belonged to some neighbors as we'd seen their little boy tossing him around by his tail one day. Needless to say we just knew that we couldn't send him back home to them so he became a member of our family.
As to how he got his name...A few months earlier I begged my husband to let me have a kitten and he reluctantly agreed saying it would be nothing but, "Trouble" so that is what we named that kitten. When he agreed to let us keep this one he said he would just be another "Nuisance" around the house so that is how he came to be our beloved Nuisance.
This cat loved playing in the snow and whenever it snowed he meowed at the door to get outside so he could play. One year he had a bad ear infection so we hauled snow inside and dumped it in the bathtub for him to play in. You can see in the picture how much fun we was having.
You could put almost anything on this cat and he would let you. He's been a "Carnival" cat, a New Years Cat, and even inside a jack-o-lantern as a tiny kitten. He was certainly well loved and well photographed. In the coming days I'll share a few more pictures of him.
Coleen just adored this cat and it was sure hard trying to explain to her why he wasn't here anymore. Of course children seem to adjust rather quickly and I think she's accepted his being gone a lot easier then I have. It seems so odd to pass by the chair he loved to lay in and not see him sleeping there. He loved to purr and eat (yeah you can't tell he was well fed in those pictures can you?)...He loved to YOWL at the top of his lungs in the middle of the night, go for car rides, he even laid on the dashboard and would watch the trees as you went by and try to bat at them. He was always very friendly and people just loved him. He had a lot of fun with all our other cats and the last photo is of him and the other 3 cats taken just a day before he passed away.
It was so sudden and unexpected. I had a hard time trying to write about it the night he died.
He started having breathing problems on Sunday night and not knowing our regular vets home phone we had to take him to an Emergency On Call Vet. She thought he was having an Asthma attack so she gave him a steroid shot and some pills to give him for the next few days. We had to keep him calm (if that was possible) so he spent the night in our bathroom. I kept getting up to check on him but he wasn't any better and the poor thing didn't sleep all night long. The next morning I called our regular vet and he said to just keep an eye on him & if he got worse to bring him in. At noon I just didn't feel he was any better so I took him in to our normal Vet. He gave him a faster acting shot and said to keep giving him the Prednisone pills. By evening he was restless and still had hard labored breathing. We took him in to lay him on our bed to give him the pill about 6:00 when he soddenly started convulsing and we laid him on the floor and he was gone. It was really very traumatic to witness and also so sad to see him that way as he was such a beautiful cat.
It's hard to say "Goodbye" and quite frankly we never will as he lives on in our hearts and in these special photos we have of him. Gone but not forgotten - Nuisance 1994-2008
Posted by Ida at 1:13 PM