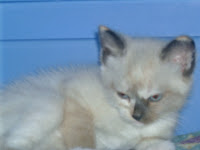 Tuesday after bowling my mom wanted to stop by the Pet Store so she could buy a fish for her tank. As is my habit when I'm there I took a peek to see if they had any cute kittens. Normally I just LOOK and leave. That wasn't the case this week. I saw this little beauty and was hooked immediately. Now mind you we have 4 other cats already so I really didn't need another cat. I called hubby (who happened to be out of town working) and he said, "NO, NO, NO...We do not need another cat." Of course I did my best to convince him that we did need one and that she was sooooo CUTE etc....but in the end he said his decision would be not to get one but he always leaves me to decide what I think is the right choice. Of course you know what my choice was. Yep, I bought her. She is part Siamese and part Calico (the owners were calling the Simaco's)

I decided to name her CallieJo (sounds like Calico if you say it fast enough). The first night we had her I barely got any sleep. None of the other cats liked her and I didn't think they would so I bought a big carrier to sleep her in until they get use to her. She mewed and mewed something awful. That of course caused our big male (also part Siamese) to YOWL at the top of his lungs. He could give a Howler Monkey a run for their money I think for loudness! Finally at 3:00 am still awake and exhausted from lack of sleep I got up and found a fuzzy teddy bear that I put in the carrier with her and within 5 minutes she was sound asleep. Ah, peace and quiet at last.

It only lasted though until 5:00 am when my husband would normally be getting up. He always lets the other cats out for a romp around the house and some cat treats before he goes to work so they started pounding on the door and meowing which woke the kitten up. Needless to say I was pretty tired the next day.

She is a sweet cat though and I think that she makes a nice addition to the family.