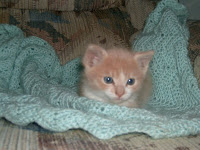 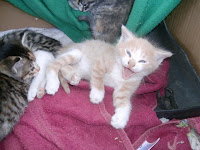 It gives me great pleasure to introduce you to the latest member of our family. This little guy is none other then, Harley ("lil hog") Krause.
With the passing of our beloved Nuisance we were left with no male animals in the house. Some neighbors down the street from us had kittens a few weeks ago so I decided to check them out and see what sex this little yellow fur ball was. Turns out he is male so naturally we (well hubby did protest a great deal about this but knew the battle was lost) just had to bring him home to live with us.
He's just about 5-6 weeks old and wasn't entirely weaned yet but the owners were wanting to find homes for the kittens as quickly as possible so they suggested we take him home early. Personally I think they were tired of my stopping by everyday and sitting on their porch playing with the kittens so they just let me take him a few weeks early. None the less he's here to stay and fitting in quite nicely. The photo on the right was taken at his old place and I'm not exactly sure what he was trying to tell me but it sure made for a fun photo.
So far the "girls" are adjusting to his being here for the most part. Dottie our short haired Calico could care less. Snickers the long haired tortoise shell Calico is pretty persnickety towards him but she knows he's not going away so she just tries to avoid him. The other new kitten, Callie-Jo enjoys hissing at him and batting at him but she has tried to get a little rougher then she should and gets promptly chastised for it. I'm sure in time they'll be bosom buddies.
Isn't he a cutie! We now have 5 cats (yes, they call me the "Crazy" Cat Lady)...the other cat, Blackie is basically non-existent as she is never around any of the other cats. She was pretty much neglected and sometimes abused by her former owners and hates all other cats so she spends her time alone in her own little room. She's fed, watered and petted though and seems perfectly content living her life that way. She occasionally ventures outside but lately hasn't even wanted to do that as loud noises scare her. It may seem cruel to keep her secluded but she appears to want it that way so we let her be. Someday I'll share some pictures of her as well.
Have a truly terrific day, pet a cat (it helps lower your blood pressure, proven fact.)!
Posted by Ida at 12:01 AM