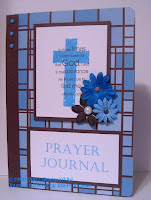 Wow hard to believe we are into week 7 on the Blogger's Challenge Group. We had several new members join last week so please be sure to check out their creations as well. Their names are listed on the sidebar under (Blogger's Challenge Group).
For this week we were to Alter something, anything we wanted, a tin, a CD case, a picture frame etc...Well I must admit that I had thought about skipping this challenge because I just don't do that sort of thing. I'm really more of a Card Making stamper then anything else. I don't Scrapbook (Gasp!) and have a hard time figuring out patterns for 3-D items like boxes and such so it was hard for me to break out of the "box" and complete this challenge but I did try it. The first picture is the "Before" picture except that I had already removed a little medallion off the front where the circle is and couldn't find where I'd put it so you'll just have to image what it looked like with the medallion on it.
I decided to try a fairly simple idea by Altering a Journal as that didn't seem like it would be to difficult. It's nothing fancy and I did have a few minor problems as the spine of my journal doesn't lay flat since I apparently didn't measure it properly and then the glue stuck down before I could fix it so it's staying as is but since I'm using the Journal it doesn't matter to me that it's not perfect.
I used the Refuge & Strength stamp set from the new Fall/Winter Collection from SU and Chocolate Chip Card Stock along with Whisper White & some designer paper from DCWV that I thought reminded me of a Stained glass window. I dyed one of the flowers with a Chocolate Chip marker and glued a half pearl (Pretties Kit) in the center. The other 2 flowers are from a bunch of flowers that were sent to me and I added brads in shades of brown to their centers. The sentiment was computer generated. If you have any questions on how this was made feel free to e-mail me.
Again this was a Challenge for me but it was good to try something different and that's the fun of belonging to this group.
Posted by Ida at 7:24 AM