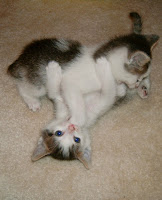 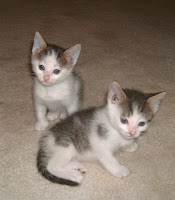 I use to do a thing on my blog on Mondays called, Cattitude Monday. I had hoped to get some stamped images of cats because I don't have a lot but no one sent me any so eventually I stopped posting my cat cards on Mondays. However I think I'll start again with at least something "Cat" related on Mondays. Today's post are photo's of those 2 little adorable kittens that we took in last Tuesday. Hard to believe they have almost been here an entire week.
My how they have changed!
The one that was so feisty & spit at me all the time the first day I named, Spitzer and then my husband thought we should call them Wellington (Spitzer) and Melrose because those are the names of the streets where the Apartment complex is being built and that's where the kittens were left by their mother. Well (Spitzer) now Wellington is anything but feisty now. He's such a mellow little guy and just loves to be held & petted. He's a purr box and a half.
The other smaller little guy, Melrose is now quite feisty and just loves to climb all over you & slide down your arms, legs, feet etc...so needless to say I have quite a few battle scars already & me being allergic to cats (yes you read that right & it's a LONG story) but I take allergy injections and have for 6 years so I'm able to be around the 4 cats that we had before we took in these two little guys and thankfully all the scratches from the kittens haven't really bothered me to much. I'm thankful though for the makers of Benadryl!
We have already found a wonderful home for them. Sadly we just can't keep them with 4 adult cats already in the house. However a clerk at the grocery store we shop at has fallen in love with them & he wants both of the kittens. His old cat was stolen and he really misses having a cat so we're happy that they will be going to a good home with someone who adores cats as much as we do.

I took several photos of the kittens today and wanted to share them with you.
Photo 1 is the 2 kittens actually sitting still! Melrose is on the left & Wellington is on the right.
Photo 2 is me feeding Wellington while Melrose is playing at my feet.
Photo 3 is the two of them playing rough & tumble games with each other.
Have a great day!
Posted by Ida at 4:22 PM