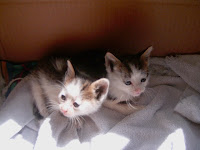 This morning I received a phone call from DH who started off the conversation with, "If I tell you about this you can't keep them." Weird huh? - Anyway he want on to tell me that they had discovered a wild mother cat & her 3 kittens this morning under a pile of lumber at the construction site he is working at. The mother grabbed up one of the kittens and took off with it and just left the other two kittens there under the wood pile. When he called me it had been almost 3 hours and she hadn't returned for them. He wanted to know if I could come get them and then take them to the Humane Society when they opened at noon. I went and got the poor little things and brought them home. Then I called our Vet and was told that the Humane Society more then likely would put them down since they are so small and not weaned. Well naturally I couldn't let that happen (I'm to big of a "softie" when it comes to cats & small helpless animals).

The Vet gave me a recipe for "kitten formula" and told me to feed them every 3-4 hours. I had to go buy some kitten nursing bottles and the stuff for their formula. I could have bought already made up formula at the Pet Store but our Vet has always been good a recommending things that work just as well but cost considerably less money. The one kitten took to the bottle right away but it took some coaxing to get the other kitten to eat but it finally did. I'm thinking that both kittens are males (near as I can tell but I could be wrong). We have given them names. The one on the left in the photo is the smaller, shier one and we are calling it, Melrose and the one on the right I named Spitzer because it spits at you every time you try to touch it. Hubby thought we should call them Wellington & Melrose because those are the names of the streets where the construction site is located so Spitzer is now Wellington Spitzer and Melrose doesn't have a 2nd name yet.
They were pretty dirty & had a lot of fleas (UGH!!!) so I had to give them a bath to get the fleas off since they are too young yet for flea medication. They'll probably need another bath tomorrow since I didn't get all the fleas off but they are much cleaner & happier now.