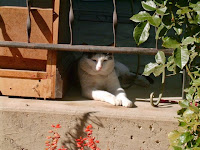 Remember this post from a couple of weeks ago:  http://faithartistry.blogspot.com/2008/09/cattitude-monday-introducing.html  - What a difference two weeks has made.  Our,
"Mystery" kitty is now quite at home on my mom's porch and will even allowed a few photo's to be snapped (he doesn't like the sound the camera makes though.) 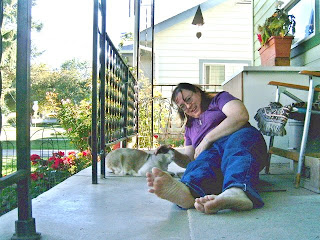 Last week I took him out some Tuna Fish and the water off of the tuna and made a friend for life!  He's allowed us to even pet him and while this isn't the greatest photo I've ever taken (I had to put the camera on timed photo) I did get a picture of him letting me pet him.  See that chair behind my big butt?  That's my mom's lawn chair on her porch and now if I sit in the chair he'll hop up on my lap and let me pet him and oh can he purr.  The problem now is that he has claws and likes to "kneed" them into my knees (not so good when you're allergic).  So this morning I took a folded blanket out with me so he could hop on the blanket without doing damage to my legs.  He of course wants to stay on my lap and while that would be nice I had to eventually get up (He's quite heavy) so I ended up having to just stand up holding him on the blanket and setting the blanket down in the lawn chair with kitty still on the blanket.
He loves attention but just had to gain trust in the fact that we weren't going to hurt him.  I think he'll be sticking around now as he's there every morning and every night regular as clock work for his food, water & "lovins".
Posted by Ida at 2:06 PM