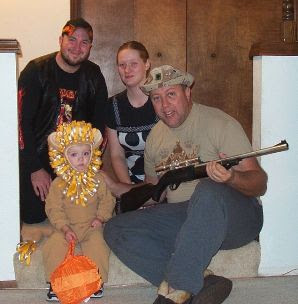 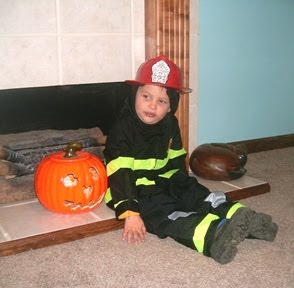 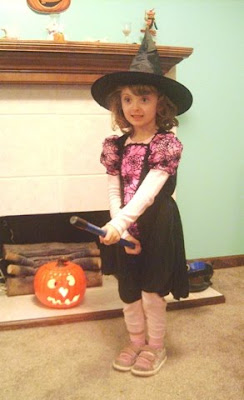 Well another Halloween has come and gone but I wanted to share some photo's with you.
The little "Witch" in the picture is my granddaughter, Coleen (Age 41/2) She borrowed our broom (which closes down to a smaller size) so she could have her picture taken riding a broom!

The "Fireman" is my nephew, Andrew (Age 3)
He wasn't real cooperative about getting his picture taken but this one wasn't to bad.

The "Lion" is my nephew, Timothy (Age 2) - His mom made his lion costume. The other people in the photo are his parents and my brother (The one hunting the lion)

It was a nice night for the kids but we barely had 35 show up. Most people take their kids downtown where merchants pass out candy so most of those who do show up are the older kids. We had 2 girls show up dressed in costumes that sort of looked like "hookers" and when they said, "Trick or Treat" I asked them, "What kind of tricks do you do?" You should have seen the look on their faces....PRICELESS!
Posted by Ida at 6:04 PM