Cattitude Monday - The other cat 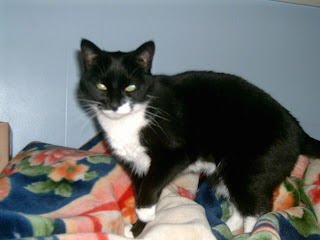 Well I thought she deserved a post all her own after what she's been through. This poor little cat came from a home where the people just weren't capable of taking care of her properly. They had some mental problems and the owner tended not to feed her properly (if at all) and by the time they moved and told us we could have this little cat she was nearly starved to death. She had super bad diarrhea as well which we found out was caused by a parasite in her stomach from drinking bad water. Her fur was falling out and she had been abused as well by the husband so she is a very skitish little cat (afraid of most people & especially men) We took her in but as I stated she is scared to death of our other cats & while the 2 females are just "curious" about her the big male cat (18 1/2 lbs.) tends to corner her if he gets the chance and literally scares the "crap" out of her. Yes, one day after I let her in from outside I forgot to take her straight up to her room when I heard this horrible commotion and discovered that he had her cornered in the upstairs room my husband uses for his office area. She was so scared that she messed all over the closest floor. Needless to say it was NOT very pleasant to clean up but I did it anyway (holding my breath for most of the time) and got her situated in her room where she promptly hide under the bed. She is a super loving cat (to me) and boy can she purr but she spends most of her time in a little bedroom all by herself and I go up several times a day to pet her and clean her litter box, feed and water her and occasionally she ventures outside but not for long as the noises outside tend to freak her out. Her original name was, "Baby Girl" but my mom (who lives next door to us) refused to call her that so we renamed her, Blackie and that seemed to be okay with both of them. Hope you think she is as special as we do.
Posted by Ida at 8:21 AM