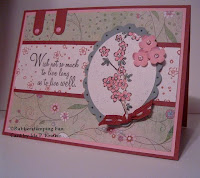 Julee at Poetic Artistry is still running her Beach Blogger Bingo game. Today Round #5 started. She has a new "master sketch" for us to follow so today's card is based on that sketch.

I'm also EXCITED to report that I received my FREE stamp set from: Rubber Stamping Fun
in today's mail. Several weeks ago I was chosen to be part of a Review team for this new stamp company. We got to choose from 22 never before seen stamp sets and received that set for free. All we had to do was post a link to their website & show our art work using the set we received on our blogs. My card today is done using the set I received. It was #22 in the little review catalog that we got to pick from. Since the stamp sets have never been released they don't have names yet. I'm going to call my set Garden of Happiness which may or may not be the name it ends up with when they release this set to the general public. I just think it suits the stamps in the set.
Card stock used: Cranberry Crisp (SU - now retired), Pretty in Pink, Sage Shadow (SU)
Designer background paper - Source unknown as I received it as part of some blog candy that I won from, Michelle at Twisted Chick Creations. I thought it was so pretty and I decided to base my card color scheme off of that paper. I also used Shimmery White card stock from SU as well.
Inks used: Pretty In Pink, Cranberry Crisp, Sage Shadow, Creamy Caramel, (SU) & Palette Noir Black.
I watercolored the apple blossom image and punched a portion of it out with my Mega Oval Punch and then layered that to the Giga Scalloped Oval and pierced the scallops with my Crafter's Tool Kit. I stamped my sentiment with the Palette Noir black ink and then stamped the flowers around it in Cranberry Crisp ink and layered this to a strip of Cranberry Crisp.
I added to punched out pieces of Cranberry using the Word Window punch and added two Pretty In Pink brads. I glues a Cranberry Stitched bow and added 3 pink flowers punched with the new Three For You punch box set (SU) and highlighted the centers of the flowers and the main image flowers with Frosted lace stickles.
I think this card has a nice soft, feminine feel about it.
Posted by Ida at 2:19 PM