Cattitude Monday - In Memory Of 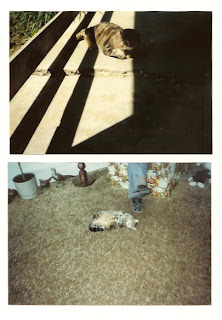 Today I'm dedicating Cattitude Monday in memory of a special cat named, Pennywinkle. She was given to my mom by her grandson but quickly became my dad's cat. He adored this cat & one of his favorite things to do was to wait while she was sleeping or laying at his feet (see photo) and then move his foot quickly which generally resulted in startling the poor cat and she's jump and he'd laugh. He played with her, petted her, held her for hours and in general just loved her to pieces. After he passed away in 1998 my mom said she'd keep his pets (he had a dog too) until they passed away from natural causes. The dog, Rosie passed on several years ago and sadly this past Friday, May 10th we had to have Pennywinkle put down.

When my mom went to feed her that afternoon she barely greeted her at all and every time she'd stand up she would just fall over. Her back legs were very weak and not supporting her, almost as if she'd had a stroke or something. She'd been getting thinner & thinner and just didn't look well at all. We called our vet & talked it over with him and decided that the humane thing to do would be to put her down. She was going on 20 (yes, 20 years) of age and the quality of her life was not going to get any better. It was so hard for me & for my mom since this was basically our last remaining "link" to my dad. I cried, my mom cried & my husband was sad as well. He stayed with her as I just couldn't bear to be in the room when she went. She's buried in the pen with dad's dog now & mom bought some flowers and planted them on their grave site this weekend.

I am a firm believer that animals go to Heaven so I know that Pennywinkle has been reunited with my dad now and enjoying a much better place. She will be missed.

Sorry the photo's aren't the best but it was hard finding good pictures of her.